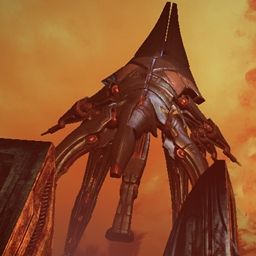 These coordinates match our trace of Leviathan.

I’m glad you made it back… and I’d appreciate it if you avoided talking to Leviathan any further.

I don’t want any tentacled creature inside your mind… except me.

I can only imagine talking to something so huge, so… alien. I hope it helps against the Reapers.

That mining facility… everyone there under Leviathan’s control. It reminded me of Feros.

That mining facility… all those people, indoctrinated, losing ten years. I can’t even imagine what that’s like.

How many other people out there are trapped like that? We need to find Leviathan.

I’m glad Ann Bryson got out safely. I just hope we find Leviathan before the Reapers do.

I thought I’d lost you down there.

Don’t do that again, not even to forge an alliance with a damned Reaper-killer.

You’re worth more than that.

So we have Leviathan. I hope it stays on our side.

Leviathan’s mental restraints are odd. My AI shackles served similar purposes, but why add sensations of darkness or cold?

I have formulated a psych profile for Dr. Ann Bryson. She is not used to death, but she may be quite capable under stress.

So the Reapers did not fully exterminate their creators. That suggests they are fallible, even on large or long-term scales.

Watching you break the news to Ann about her dad… I gotta say, that was rough.

I heard you had to break the news to Ann about her dad. I’m sorry, Shepard.

It’s so brutal what happened to him. I can’t imagine what she’s going through.

You took a huge risk down there. Almost died to figure this out.

I’ve been thinking about what we learned, Shepard. The thing is, I don’t really care what the Reapers are or where they’re from.

They’re monsters that need to be put down. That’s all I need to know.

I can’t believe what I saw down there.

This Leviathan thing can just kick you out of your own head?

I don’t know what’s worse: killing people outright, or making them suffer like that.

Strange stuff back on that asteroid. We’ve seen indoctrination before, but ten years? Leviathan had its own private army.

You’ve got to wonder how much longer that would have lasted if we hadn’t come along.

Just when I thought we were getting a handle on Reapers, this happens. Maybe Leviathan’s more than a bull’s-eye?

Shepard. I admit I was worried about you on that dig site. Things got pretty hectic. Not used to feeling like that, you know.

That’s what love does. Turns a guy like me into a nervous wreck with something to lose and the aim to make sure he doesn’t. Nobody better hurt you, is all I’m saying.

Shepard, I looked over your mission report. Gotta say, it feels like we’ve been after these Reapers forever…

From Sovereign to Leviathan… they’ve been a pain in the ass the whole time. But at least we’re starting to see the big picture.

Never really thought we’d get any answers. It doesn’t change much, but it does make this war feel a whole lot bigger.

I saw many strange things in our war against the Reapers. An entire settlement of Densorin were once studying things far beyond their knowledge.

Celestial mechanics, morphological simulations of galactic language… things even we didn’t understand. At the time, I thought they were crazy.

But now, after what occurred on that asteroid, I wonder.

If Leviathan is a defector–a Reaper that broke away from the others–then it is also a traitor.

And traitors are never to be trusted, even among the enemy.

If they can betray their own kind, imagine what they can do to you.

I have studied your human religions, Commander–your « Devil » and his fall. Leviathan and its kind deserve the same fate.

They once unleashed a plague that has haunted all of our history to this day.

I say their own hell is the abyss you found them in… one I hope they never escape from.

The mining colony was completely brainwashed, and the Reapers retreat the moment the artifact is destroyed?

I don’t know what’s going on, but I know I don’t like it.

Promise me you’ll be careful, okay?

If another Harvester keeps me from dropping you off in the target LZ, so help me…

Esteban, don’t let those oversized roaches push you around.

Mr. Vega, taking on a sky full of worm-necks in a troop transport is like sending you against the Earth invasion armed with brass knuckles.

What? You don’t think I could do it?

Can’t say I was happy sending you down in that submersible by yourself.

Wish I could have been with you, but if we were together in that tight space… never mind.

Don’t know why I ever worry about you. Take on ancient aliens from the deep? Sure, no problem.

That asteroid facility was messed up.

Ten years of your life, just gone. You’re working out there, sending letters to your family back home…

Then you wake up, and your hair’s gone, your kid’s in college, and your six-pack has turned into a keg. Just messed up.

I don’t know the scientific measurement of a shit-load, but that seemed like a shit-load of harvesters.

With the Leviathan on our side, maybe we pull this thing off after all.

Too bad Ann never got to see her dad’s work pay off.

At least Ann’s still around to see her dad’s work finally pay off.

It feels good to help those people get their lives back. Ten years is a lot of lost time.

Let’s make sure that we never let time just slip by us, okay?

So a Reaper goes rogue and kills one of its own. That’s what we’re looking at here, right?

Bryson really was onto something big. Amazing.

A lot of smart people in this galaxy. I’m a lucky guy to work with so many of ’em.

You scare the hell out of me with those risky stunts, Shepard, but I guess it’s also part of what I love about you.

Nice to have everyone back on dry land, so to speak.

You know, whenever we discover something amazing like that, I wonder what else might be out there… or even right under our noses.